Compilation video of 125 cc races at Tailem Bend Round 1

A very good field of 21 karts turn up for the first Round of the Queensland Superkart Series at Lakeside Raceway.

All of whom increased out 125cc Gear Box Karts on the track except for Mark who joined the 125cc Non Gearbox kart ranks.

#41 Brandon Stillwell NGB Light and we appreciate their coming all this way.

James told me he use to race 250cc GP Bikes in the early 90’s when our Pole sitter Tim Weier would have been in Kindergarten. 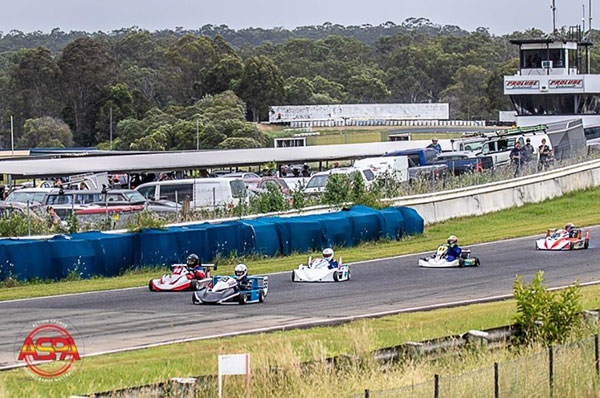 Despite the cloudy and grey sky, it was a dry track for qualifying.

Tim Weier #89 in his 250cc National was first in line to go out but the rest of the field beat him out when he lost radio contact while still in the marshalling area.

His earbuds had failed. They were quickly replaced, checked and he headed out to set the fastest time of 55.79secs to put it on pole.

Lachlan Crisp #88 also in a 250cc National was only able to set a time of 59. 60 secs, putting him 3rd on the Grid, when his feet kept hitting the nose cone and he was unable to put enough pressure on the pedals to set a faster time.

However this was easily rectified by remove this section of his nose cone.

He started in 3 position behind Doug Amis #46 in his 125cc Kart. Doug is off to the Bend in a few weeks’ time for Round 1 of the SKA championship and had come out more for a shake down and was happy with his time of 57.94 secs.

Paul Davis had his muffler fall off, #77 Ben Longland had his chain break, but both were fixed in time for the first race,

Greg Hack unfortunately couldn’t get the Stockman Honda running and would see him sit the day out. #66 Amber Bothamley was very happy with her qualifying time which was 2 seconds faster than her best time around here in 2020.

The rest of the field had no problems and lined up with the following times:

The rain continued to stay away and it was slicks all round for the first race of the day. There was some confusion at the start when the Starter didn’t wave the green flag. Some of our newer guys not realizing this meant an aborted start, started to race and probably thought all their Sundays had come at once when they went past the karts on the front rows.

There was also a miscommunication between the Starter and the Tower and no call came over the radio to abort the start. Tim Weier quickly realized that it wasn’t about to be aborted and quickly got back to the front of the field and despite a bolt falling out of his dash and it spent the race bounding around on his knees he cleared out to win comfortably. Doug also quickly made it to front of the rest of the field and was circulating comfortably when he was baulked by a slower kart at Hungry and spun off but no damage was done. Lachlan was not so fortunate and had been swamped by the mid field and had to work his way though and was in third when his Kart oversteered coming down Eastern Loop, he grabbed it and then lost it again and went off the track. Paul D crossed in 2nd and James G was 3rd and he was really happy after learning that reset the NGB Light lap record, He came up for South Australia with the intention of setting a new lap record and he did with a 1.00.19. Scott ignition problems continued and Ben’s chain broke again and they along with Tony had DNF’s.

Because of the mix at the start we didn’t get to see our usual close racing. James Gorman took out a comfortable 3rd ahead of James Boden and Brandon. Peter was a couple of seconds behind them and spread behind him was David, Leighton, Kyle, Mark, Glenn, Ross, Paul and Amber. Liam was leading his class when with a 100 metres to go to the chequered flag his right rear tyre came off and he backed it into the wall. Fortunately this didn’t do any damage and with help from the other Karters a key was put in his back axle, the wheel put back on and he was back out for the next race. Ben found his axle was walking, causing his chain breakage. This was fixed and no more problems with if after that.

Ready for the 2nd heat but there was a small delay after a very light sprinkle made the track a little slippery going into Carousel and Kyle and Tod went off on the warm up lap. The field was bought back into the pits, both karts were fine and they were able to restart with the rest of the field. No problems with this start and Tim was away out in front but Lachlan was down in 4th when he was passed off the start by Paul, Liam and Doug, However he passed them all down the straight on the second lap. Scott was in 9th spot on the second lap but was nudged from behind as he went into Eastern Loop. This put him into the wall and he was taken away by ambulance for observation. He did return to the track later in the day with a few bruises but otherwise okay although his kart didn’t fare so well. The field circulated around until the track was cleared.